Richard Stallman speaking in Bern and protesting against Berne Convention


Download Richard Stallman’s speech as OGG file (67MB, 2h 4min) and play it with the VLC Media Player for Linux, Mac, and Windows

PRESS RELEASE OF THE
PARLIAMENTARIAN GROUP FOR DIGITAL SUSTAINABILITY

Protest against the Berne Convention on Unterer Waisenhausplatz in Berne, 11 February 2010

On Thursday, 11 February 2010 at 1 pm, Richard Stallman, co-founder of GNU/Linux, will lead a protest on the Unterer Waisenhausplatz in Berne against the Berne Copyright Convention. 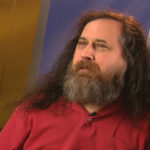 The protest criticizes the Berne Copyright Convention as unacceptable in the Internet era, for several reasons.

Richard Stallman started the development on the GNU/Linux operating system which runs on millions of computers. For some time he’s been in support of the rights of computer users against the creators of software. For his achievements, he’s received the ACM Grace Hopper Award, a MacArthur Foundation fellowship, the Electronic Frontier Foundation’s Pioneer award, and the Takeda Award for Social and Economic Betterment, as well as several honorary doctorates. He also campaigns for the freedom to non-commercially share copies of published works.

Stallman said, „The existing copyright system makes a few stars very rich, supports a small fraction of artists adequately, and is an abject failure for the rest. However, it is great for supporting the big business of the copyright industry—and nowadays they are extending it to forbid sharing. It is a system that attacks our freedom so it can waste our money. New methods can support most artists better, while respecting our freedom, and only copyright industry will lose. Good riddance!“

„Copyright ought to balance two kinds of public interest: that in encouraging publication of more works, and that in freedom to use the works already published. As for the authors and artists, they enter the issue only as people whose choices the public may wish to influence“ Stallman adds.

National parliamentarian and co-president of the parliamentarian group for digital sustainability Edith Graf-Litscher agrees: „The current copyright is not a fair balance between public and copyright holders. The free exchange of knowledge is hindered to benefit the creators. Despite the fact that most creators base their work on priors.“ The Pirate Party Switzerland assists, party president Denis Simonet: „We support Stallman’s cause. We need a balance between public and copyright holders.“ The Tux Party of the University of Bern and the student representatives of the faculty of computer science and applied mathematics support Stallman’s motion and will join the protest.

The protest immediately follows a speech on copyright vs. public at 10 am in the Aula of the University of Bern. After the talk the protesters will jointly march to Unterer Waisenhausplatz for the protest.